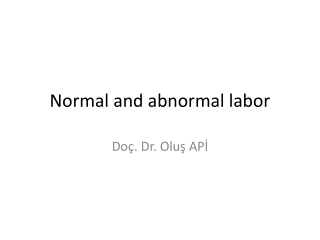 What Is Normal and Abnormal? - . a man kissing another man. a woman slapping a child. a man driving a nail through his

Abnormal Labor - Quick revision. definition of labor.criteria of normal labor.stages of labor.. defenition. labour can be

Abnormal Labor - Normal labour. uterine contractions that result in progressive dilation and effacement of the cervix.

Aging: Normal And Abnormal - Definition of aging: ?a decreasing ability to survive"aging: cellular aging, and aging