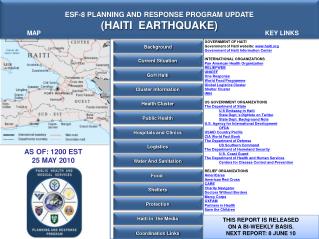 THE HAITI EARTHQUAKE 2010 AND CARICOM RESPONSE TO HAITI - . presentation outline. context setting and the event the

Haiti Earthquake Response - . before the january 12 earthquake, haiti was already the poorest country in the western

CRWRC Haiti Earthquake Response - . as of june 14, 2010. crwrc in haiti. crwrc has been extensively engaged in both

Haiti and Pakistan: Moving forward - . january 2011. 12 january: haiti. it is one year since a major earthquake hit

Presented by: Cary Emerson - . table of contents. life in haiti the differences of haiti now &amp; before the