Theatre in the Golden Age of Athens - PowerPoint PPT Presentation 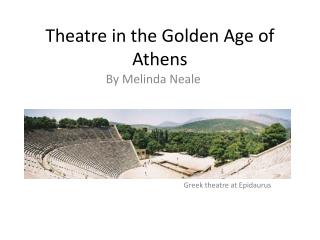 Theatre in the Golden Age of Athens Theatre in the Golden Age of Athens

objective: To introduce Pericles, the leader during Athens's Golden Age - . to tour athens during its golden age and

Classic theatre - . greek and roman theatre. ancient greek theatre. - is a theatrical culture, which took place in a

Athens, Greece - . blair mundy june, 3, 2010 period 6. table of content. climate of athens how to get to athens hotels

ATHENS AND SPARTA - . 2 of the greatest city-states in greece. read pages 292-295 and be prepared to compare and contrast

Introduction - . ancient athens achieved so much that it is often called the 'cradle of western civilisation'- this means

Ancient Greek Theatre - . background. the golden age of greece no empire/ city-states between persian and peloponnesian