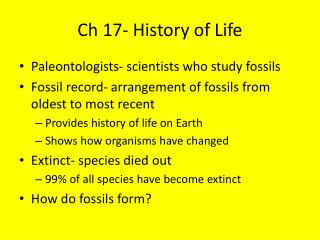 Ch 17- History of Life. Paleontologists- scientists who study fossils Fossil record- arrangement of fossils from oldest to most recent Provides history of life on Earth Shows how organisms have changed Extinct- species died out 99% of all species have become extinct How do fossils form?.

What is the Secret of Life? - Deoxyribonucleic acid is the answer history lesson on dna 1869 swiss scientist friedrich

Life-history Characteristics - . all organisms have been selected to maximize reproductive success over the course of

Chapter 1 - . introduction: themes in the study of life. overview: inquiring about the world of life. evolution is the

Fire Department History - . fire department history. firefighting one of worlds most honored occupations and one of