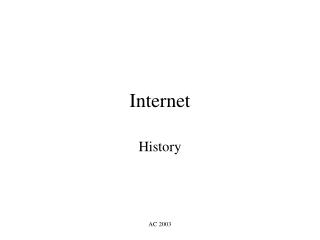 Internet. History. From calculi to computers. In prehistoric times men computed using small stones : calculi In the Orient 2000 more or less years ago appeared the Abacus (it uses little balls on metal strings encased in a wooden frame)

Evolution of the Internet - . 1960s. u.s.department of defense. • created arpanet - a group of networked computers.

Internet Fundamentals Learning to Use the World Wide Web The Internet Teacher - . internet fundamentals. introduction the

Commercialization of the Internet or Why Introducing the Market Worked so Well - . shane greenstein kellogg sm. topics.

The Internet- A Boon or A Curse ? - . presentation made by- joy oberoi.

What is the Internet?

The Internet - . what is a network? what is the internet? web browser requirements of the internet search engines urls