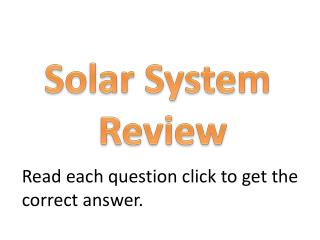 Solar System Review. Read each question click to get the correct answer. To spin around is to a. rotate. b. revolve. c. orbit. d. gravitate. Chunks of rock or metal that orbit the Sun are referred to as a. daystars. b. comets. c. meteorites. d. asteroids. Solar System Review - . solar system review. write your answers on your whiteboard as we go over it. what is a planet?. a

Weather, Sun, and Solar System Review - . the main difference between a star and a planet is:. planets are a source of

Solar System - . at-home-project. board games examples for your at-home-research project!. be creative!. recycle an old

Solar system - . saturn. saturn was the greek god of agriculture. he was called cronus by the greeks. in many ways saturn

Solar System - . vocabulary. orbit means to circle around. the planets orbit the sun. our moon is a body in space that

Solar system - . our solar system has 8 planets and one dwarf planet. every thing in space orbits except the sun. . s un.