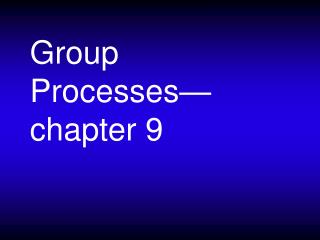 Group Processes—chapter 9 . What is a group?. Members of your fraternity/sorority Your family Members of the St. Louis Cardinals Fans watching a Cardinals game Males Social psychologists A group of people occupying the same elevator. People who like watching The Sopranos Chapter 3: Transport Layer - . based on: computer networking: a top down approach featuring the internet , 3 rd edition.

CHAPTER TWO - . a model of small group communication. phases and stages in the process of group development. nanotech

Chapter 6: A Tour of the Cell - . essential knowledge. 2.a.2 – organisms capture and store free energy for use in

Chapter 14 - . managing it: planning and implementing change. chapter objectives . how end user resistance to changes in