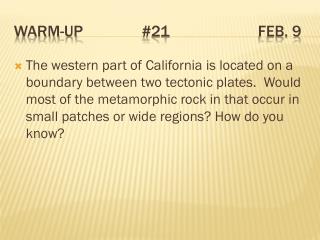 The western part of California is located on a boundary between two tectonic plates. Would most of the metamorphic rock in that occur in small patches or wide regions? How do you know?. Warm-up #21 Feb. 9. Chapter 3. Rocks.

Warm up - . on a piece of paper, each group must list three main things about the maya, aztecs, and inca civilizations.

WARM-UP - . warm-up # 1 where should i keep my science textbook? at your home. warm-up # 2 what are the first three

Warm Up - . journal response (review from last lesson) we have learned about the emphasis the victorians placed on

Warm-Up - . using the piece of paper i gave you, please answer the following questions: 1. where are you from? 2. what do

Warm Up - “ nothing is either good or bad , but thinking makes it so.” -hamlet. warm up. what makes someone a

Warm-up! - . what do you know about going to war/being a soldier? how do know this information (tv, movies, books, etc)?

Warm-Up - . list as many countries as can that are in southwest asia (middle east). warm-up. why is water so valuable in

Warm Up - . the gmc teachers decide to get rid of pizza for lunch. after a survey of all teachers, counselors, and