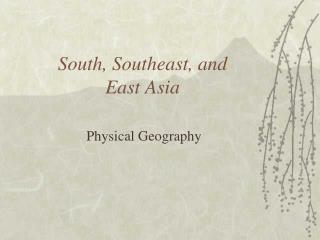 South, Southeast, and East Asia. Physical Geography. Land and Sea. The peoples Republic of China makes up about 80% of the land area of East Asia Also, China has the world’s largest population at 1.3 billion people. China’s neighbor Mongolia occupies about 13% of East Asia’s land. EAST AND SOUTHEAST ASIA - . european name?. far east. when you think of the “far east”, what countries come to mind?.

East and Southeast Asia - . by: haley and jack. geography of east asia. east asia occupies most of the asian continent,

South and SouthEast Asia - . focus of study: colonization and extreme weather. what is a subcontinent? it is a large

East &amp; Southeast Asia - . an overview from colonialism through the cold war. overview of the region. p opulation

East and Southeast Asia and Oceania - . where. where. families. sino-tibetan sinitic tibeto-burman (probably not a