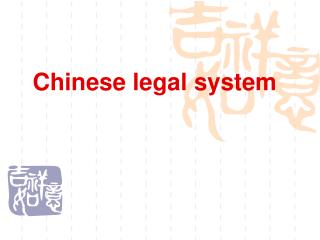 LEGAL SYSTEM - . get out your textbook and be prepared to investigate and respond!. look at the graphic on pg. 2. q:

LEGAl System - . section 1: sources of our laws. 1. what was the first known system of written law?. code of hammurabi.

Chinese Trial System - . zhenlin zhou. the third largest country in the world after russia and canada. the population is

English Legal System - . “it is not a faultlessly coherent and single, logically developed system. it grew piecemeal

International legal system - We sure if you join our office then you will get full satisfaction with our service.

English Legal System - . the composition of parliament house of commons house of lords lords reform. aims. the aims of