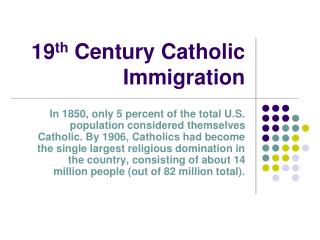 19 th Century Catholic Immigration. In 1850, only 5 percent of the total U.S. population considered themselves Catholic. By 1906, Catholics had become the single largest religious domination in the country, consisting of about 14 million people (out of 82 million total). . Immigration in the 19 th Century - . why it matters?. immigrants came in great numbers from europe and asia between

19 th Century - . nationalism/reaction/revolt/reaction. age of -isms. many of the ideas and ideologies that shape our

Norwegian Immigration to America in the 19 th century - By silje moen and silje r. paulsen. institute of teaching and

The 19 th Century - . conditions that lead to the new growth revolutions cause colonizing monarchies to shrink the