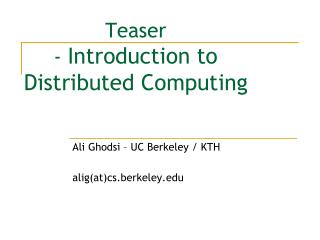 Teaser - Introduction to Distributed Computing. Ali Ghodsi – UC Berkeley / KTH alig(at)cs.berkeley.edu. What ’ s a distributed system? . “ A distributed system is one in which the failure of a computer you didn't even know existed can render your own computer unusable. “. Leslie Lamport.

Chapter05 Sensor Networks - . 5.1 introduction. what are sensor networks? “challenge of the century” new paradigm for

Distributed Systems - . introduction to cryptography minqi zhou mqzhou@sei.ecnu.edu.cn. except as otherwise noted, the