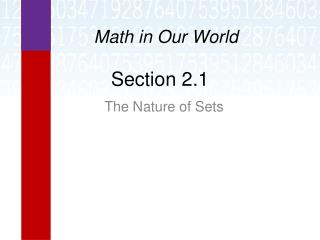 Math in Our World. Section 2.1. The Nature of Sets. Learning Objectives. Define set. Write sets in three different ways. Classify sets as finite or infinite. Define the empty set. Find the cardinality of a set. Decide if two sets are equal or equivalent. Sets. Section 2.1 - . air pressure a. is the force exerted by moving air molecules b. measures the speed of wind. c. only

Section 2.1 - . preliminary theory. initial-value problem. most first-order des can be written in the form when asked to

Section 2.1 - . cartesian plane, distance, and midpoint. the distance between two points can be found by using the

Section 2.1 - . section 2.1. average velocity is just an algebra 1 slope between two points on the position function.