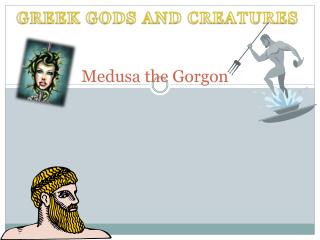 Medusa the Gorgon . Greek gods and creatures . The story of Medusa .

The story of medusa - . by james cahalane. the story of

Pan Painter Perseus and Medusa - . by alex creer. perseus. medusa. athena. what is going on

Perseus and the gorgons - . retold by noah lieberman. once upon a time there was a good king who ruled fairly and

medusa - . guardian protectress. medusa is a roman myth and is a type of creature known as a gorgon and is known for her

Medusa - A blackly humorous version of the myth. medusa. by carol ann

Μέδουσα (Medusa) - . she was the daughter of the sea deities phorcys and ceto she had two sisters stheno and

Perseus - . by aneka-fay smith. biography . perseus was a famous greek hero . he was part god and part man. like

Medusa and P erseus - . by : lashay and josiah

Medusa - Isaiah and mikey. medusa. the facts about medusa. medusa was turned into a gorgon by athena. before she got