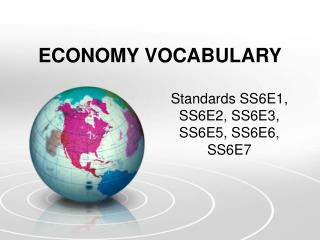 Government Vocabulary - . use the descriptions of the vocabulary terms to place them on the government array. absolute

Global Economy - . log on computers then come back to seats and answer warm ups. 1. what are the types of economic

Economics Vocabulary - . the following slides contain vocabulary terms and definitions that you need to know when

Economics Vocabulary - . unit 2. economics. making choices and satisfying the wants and needs of the consumer . economics

Copy Down on paper: Vocabulary 1.1 - . government – a political system that rules or governs a nation economy –the

THE ECONOMY - . poll: economy outpaces war on list of voters' worries. what's the big issue going to be for 2008?