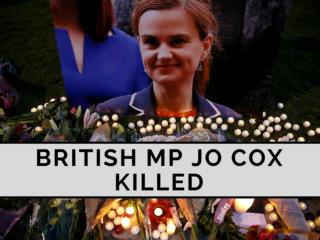 British lawmaker Jo Cox, 41, died after being shot and stabbed in her constituency in northern England, prompting the suspension of campaigning for next week's EU referendum. WHO KILLED JESUS? - . “the passion of the christ”, produced by mel gibson, is a movie depicting the crucifixion of

Hannah Cox - Botany. hannah cox. what is botany?. botany is the study of plants, also known as plant science or plant

Courtney Cox - By: cassie humphrey. courtney cox. meet courtney cox…. . the first thing you need to know….she is on

Hon. Marlon A. Penn - MP British Virgin Islands - The impact of the informal economy on economic diversification in small

Sarah Cox - . i have been to england i had front row tickets to the dixie chicks concert and got to meet them. i shook