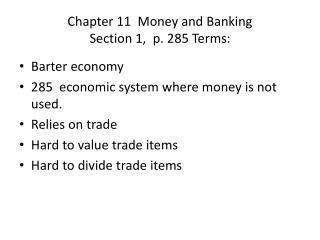 Chapter 11 Money and Banking Section 1, p. 285 Terms:. Barter economy 285 economic system where money is not used. Relies on trade Hard to value trade items Hard to divide trade items. Money . 286 any substance that serves as a medium of exchange Measure of value Store of value

Money and Banking: (or Money From Nothing) ‏ - . a bank is a place where they lend you an umbrella in fair weather and

Banking and Credit Cards - . presented by the delaware bankruptcy inn of court much of what follows is based on

Chapter 24 Checks, The Banking System and E-Money - . learning objectives. on what type of check does a bank serve as

Money and Banking - . section 2: the development of us banking. objectives . describe how banking developed in the

Ch. 10: Money and Banking - . section 1: money. money is a medium of exchange for resources. three uses of money. money

Banking - . bank deposits and money creation. u.s. banks do not print or issue money anymore. but demand deposits are