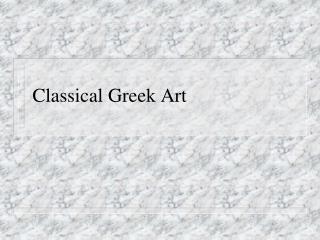 Classical Greek Philosophy - . aristotle. aristotle. perhaps the most complete thinker the world has ever known.

Greek Classical Philosophy - . “western philosophy is just a series of footnotes to plato.”. a brief overview. the

Greek Art - . by: josh gunter 3 rd pd. art i. background. greek art began in the cycladic and minoan civilization, and

Ancient Greece 750 BC – 146 BC Archaic Period – Hellenistic Period - . by kelly bryant. what will we learn in this