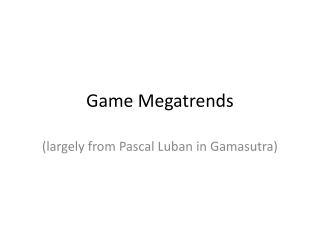 Game Megatrends - . (largely from pascal luban in gamasutra ). the necessity of increasing the commercial life span of

MegaTrends - . the major directions transforming our lives. what is a megatrend. a megatrend is a major restructuring, a

Megatrends, innovation and futureproofing. - Avoiding change fatigue and thriving amidst the chaos is the requirement of

Megatrends in Enterprise IT - . bob gourley. april 2012. the it we know today is almost over. most enterprise it today: .

Lecture 4: Megatrends Part II - Social - . “humans are perhaps the most successful species in the history of life on

3 Megatrends Affecting the CM Profession - . and what ncma plans to do about it. megatrends shaping cm sphere. the demand