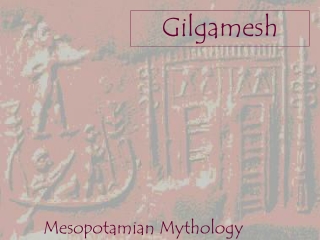 Gilgamesh - . when reading any text, but especially an ancient one, you should always memorize five (and a half) things.

Gilgamesh - . the discovery. in the mid-1800s the first tablets on which gilgamesh is written were discovered in the

Gilgamesh - . a mesopotamian epic. based on fact. gilgamesh – believed to be an actual king who reigned over the

Epic of Gilgamesh - . what is it?*. epic poem (long story) about gilgamesh, king of uruk gilgamesh was an actual king of

The Gilgamesh Epic - . llt 180 spring mmxiii. land between the rivers. the mesopotamians!!!. 4000 bc: sumerians build