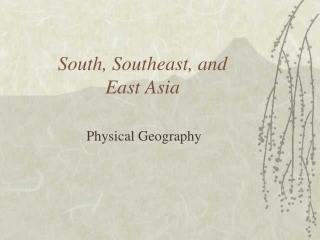 South, Southeast, and East Asia. Physical Geography. Mountains. Mountains are important in Asia because they influence: Population patterns Movement of people and goods Climate. Mountains. The most important mountain range in Asia is the Himalaya Mountains. South and SouthEast Asia - . focus of study: colonization and extreme weather. what is a subcontinent? it is a large

Answers: Southeast Asia questions (from yesterday) - . these countries are the most south and east countries in asia.

European Footholds in South and Southeast Asia - . anji chandiram. the portuguese were the first to gain a foothold in

Ingrid Christensen Sr. Specialist on OSH - Introduction to and key principles of the chemicals convention, 1990 (no.