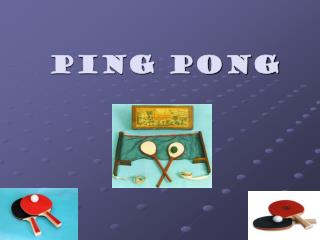 Ping Pong - History. ping pong originated as an english parlor game in the late 1800s and as played with dining tables

Ping pong - . by: jeffrey lotthammer. history. ping pong originated in england. it was first played as a parlor game

Ping-Pong! - . by charlie. why is ping-pong good for

Ping-Pong - . the perfect shot. created by ensar tota and evan mcellhenney of 8-3 parabola project. what is

Ping Pong Club - . “can you take the heat”. why should you join the club?. the ping pong club is a good way to meet

Ping-pong(Table tennis) - . where is it from?. it is from france it’s origin is loyal tennis. how many people can play