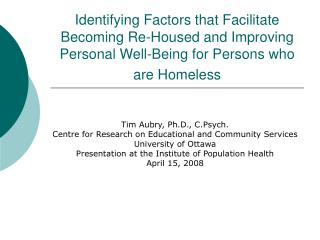 Identifying Factors that Facilitate Becoming Re-Housed and Improving Personal Well-Being for Persons who are Homeless. Tim Aubry, Ph.D., C.Psych. Centre for Research on Educational and Community Services University of Ottawa Presentation at the Institute of Population Health April 15, 2008.

Evidence-Based Practices for Teaching Skills to School-aged Children and Youth with ASD - . candace a. fugazy ma.edu,

The End of Work by Jeremy Rifkin - . civilization structured around concept of work. paleolithic hunter/gatherer

HUMAN TRAFFICKING - . pray. share. be aware. www.befree58.org. be free. who are we? where did we start? what is our