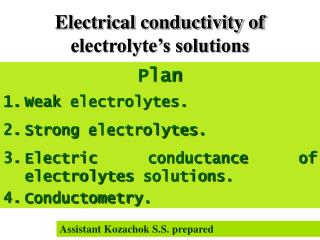 24.6 The conductivities of electrolyte solutions - . conductance (g, siemens) of a solution sample decreases with its

Chapter 27 - . current and resistance (cont.). outline. a model for electrical conduction (27.3) derivation of the drift

ELECTROLYTE CONDUCTANCE - . cmt552 electrochemistry and corrosion science. what is electrolyte?. any substance that

5 Oct. 2010 - . objective: swbat describe properties of an aqueous solution, and write an equation for a precipitation

Electrolytes - . some solutes can dissociate into ions. electric charge can be carried. types of solutes. high