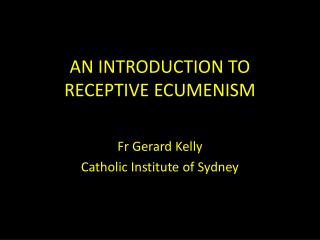 AN INTRODUCTION TO RECEPTIVE ECUMENISM

AN INTRODUCTION TO RECEPTIVE ECUMENISM

What is Ecumenism? - “the joyous experience of the unity of christ’s people and the serious task of expressing that

The Twelve Apostles of Jesus Christ - . tune of &quot;bringing in the

Lateral Inhibition and Receptive Fields - . lateral inhibition: light on one regions of retinal inhibits ability or

TOWARDS AUTHENTIC ECUMENISM - . ecumenism does not mean lessening one's fidelity to one's particular tradition, but

What is Ecumenism? - “the joyous experience of the unity of christ’s people and the serious task of expressing that

Teaching Receptive Skills - . agree or disagree?. we should teach receptive skills before productive skills. reading and

National Council of Churches in India - . experiencing, embodying, expanding ecumenism. in the service of church and

Prenatal Smoke Exposure and Language Outcomes at 15 Months: Social Aspects of Communication vs Expressive and Receptive

What is the gospel we share? - Ecumenism, mission and evangelisation northampton diocese ecumenical commission. what is

From Emptiness To Openness The Receptive Space of Inclusionality - . twelve openings. 1a. think of nature as a