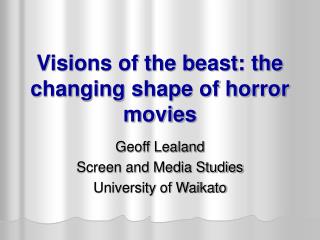 Lord of the Flies - . chapter 8-9 discussion questions. choices: the beast does not exist hide from the beast hope

||||| Topic Proposal ||||| - . the main questions i see myself using are 1.how do horror writers keep their readers

Monster Mayhem - . the horror genre. horror fiction is intended to frighten, scare, or startle its readers by inducing

Horror - . key aspects of a horror film. horror films are films that try to elicit responses of fear, horror and terror

Bella and the beast - . by katie lowe . once upon a time in a big mansion a mean old witch she cast a spell on the

Nian The Beast - . by patrick walton. nian the beast was a gigantic horrible beast who raided villages on spring

Steve Petch Sunday 29 th November 2009 - Part 7: he calls us to persevere in persecution (an earthy perspective)

The Horror Genre - . learning intentions. to have a basic understanding of the history of the horror genre. the horror

Horror Movies - . before you read:. do you like horror movies? why or why not? what makes you very scared in a movie?

Cheap Web Hosting UK - Linehorror is among the most popular genres as far as movies are concerned. viewlorium presents

http://top10sideeffects.com/andro-beast/ - By and by, the contradicting conditions never permit you to remain always