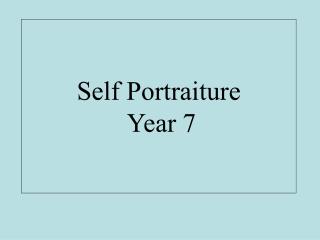 Self Portraiture Year 7. What is self portraiture?. Self-portrait - A portrait an artist makes using themselves as the_______, typically drawn or painted from a reflection in a mirror. With the advent of the camera artists could then use ___________to make their self portraits. subject.

Self-Portraiture and Portraiture - . considerations: lighting: direction and quality from direct (harsh) to diffused

INTIMATE PORTRAITURE - . exploring significance through portraiture. “a portrait photographer depends upon another

A History of Portraiture - . what is a portrait?. a portrait is a painting, photograph, sculpture, or other artistic

Abstract Portraiture - . juxtaposition. lucy mcrae. set on challenging the limits of the body, lucy manipulates the

Review of the development of portraiture - . complement to the text. the medieval period. illuminated portrait of richard

Portraiture - . 29 september 2010. portraiture. any representation of a person take from this what you will. the bad