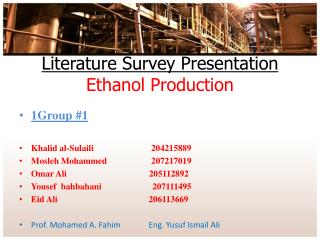 Ethanol Production - . ethanol?. ethanol is a renewable fuel produced as an alternative to fossil fuel such as diesel and

The Chemistry of Ethanol Production

Survey of Literature - . make-up work for semester 1. when was the last time you ran into a cyclops on your summer