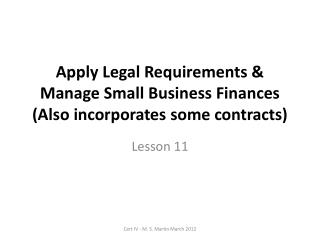 Apply Legal Requirements & Manage Small Business Finances (Also incorporates some contracts). Lesson 11. WHS Legal 2 Assignment. I just finished marking you investigations into the WHS Act, which made me realise again how far in front of other countries our laws are. CONSTRUCTION CONTRACTS - . 2014. contracts. “it is not the beauty of a building you should look at; its the

FINANCIAL FITNESS - . . . for everybody are you financially fit? do you need a financial workout? do you worry about

Software Requirements Analysis and Specification - . understand and specifying requirements. a problem of scale for small

The Legal and Ethical Environment of Business - . chapter 6 contracts. learning objectives. find out when the uniform