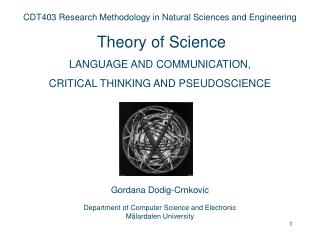 CDT403 Research Methodology in Natural Sciences and Engineering - A history of computing: a history of ideas gordana

RESEARCH METHODOLOGY - . meaning. research is an endeavour to discover answers to intellectual and practical problems

Through the Looking Glass: Reflections of a Research Ethicist or The Collapse of Science and Ethics? - . michael goodyear