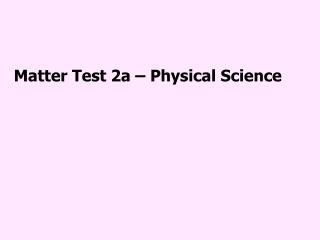 Physical science unit 2 - . greek thinkers, such as democritus. he called nature’s basic particle an atom, based on the

CAPT Science Review: - . a review of studies in science a review of biology. parts of an atom. periodic table. laws of

8 th grade Science - . post 2 review. anything that has volume or mass. matter. volume. the amount of space taken up