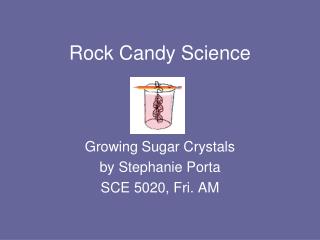 Rock Candy Science. Growing Sugar Crystals by Stephanie Porta SCE 5020, Fri. AM. Question. Will the addition of an impurity, food coloring, affect the growth of sugar crystals?. Background Information. What are crystals and how do they grow?. What is a crystal?.

All About Cotton Candy - . by: amyre martin. who you describe cotton candy. cotton candy is a type of candy that is soft

Rock Candy - . by: olivier deenik. what temperature can grow quicker. hypothesis. my hypothesis is that the very hot

Matter-Properties and Changes - . i will distinguish between physical and chemical properties i will classify matter by

Geologic Time - . introduction. nearly 4.6 billion years have passed since earth’s formation. in that time, life has