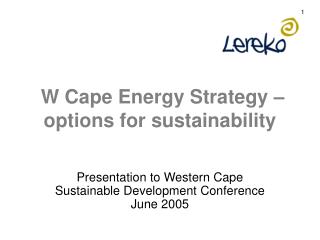 10 Year Sustainability Plan - . the “30 in 10” challenge of a greener lehman. energy. energy. replace all

Water use - . branston has grown and evolved over the years... . we’ve focused on lean operation and efficient

Energy Sustainability - . renewable energy chapter 13. use less energy. list any five practices you can do to use less