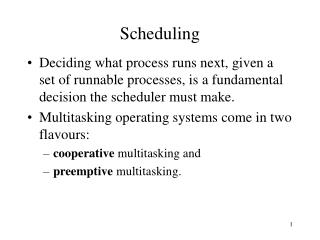 Scheduling. Deciding what process runs next, given a set of runnable processes, is a fundamental decision the scheduler must make. Multitasking operating systems come in two flavours: cooperative multitasking and preemptive multitasking.

Scheduling for QoS Management - . outline. what is queue management and scheduling? goals of scheduling fairness