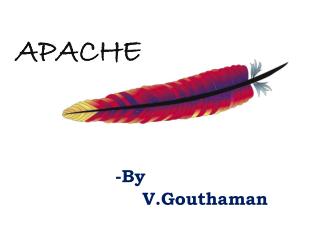 Apache Installation by Jack Davis - . web servers. the apache http server is the most widely used web server on the

Apache Installation by Jack Davis - . web servers. the apache http server is the most widely used web server on the

Apache - . by anth rod. area. the apache lived in the north west cutler area. that’s where they lived in the area.

Apache - . native american tribe. where are they? (geography). apache are natives of the southwest deserts mainly in

Apache - . expanding and using. key points. typically, you compile apache from the source code. you choose modules to

APACHE - . what is apache?. is a powerful, flexible, http/1.1 compliant web server implements the latest protocols,

Apache - . setting up a web (httpd) server. apache. apache is the utility used by linux servers to provide web services

Apache - . by coleman naegele and avan artinger. i. location. the apache tribe moved down to the sothern plains of texas

Apache - Apache!. using the online resource we installed apache without any problemsafter installing php and modifying

Apache Pulsar vs Apache Kafka [Infographic] - From zero message loss to all in one messaging, native geo-replication and