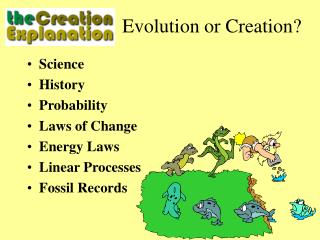 Evolution or Intelligent Design? - . an objective view of software development. stephen jenkins. in the beginning ….

Creation or Evolution? - . steve taylor. outline. what are the issues? definition of terms evolution – the problems

EVOLUTION OR CREATION - . v.1. there are two statements 1. atheists says that existence of man came through evolution,

Evolution or Creationism - . should evolution be taught in schools?. by: beau lujan. the mere mentioning of teaching

EVOLUTION OR REVOLUTION - . a sustainable renovation of a 1950's weatherboard home. evolution or revolution. sean

Basics of Creation Versus Evolution - . an overview of the issues involved in the creation versus evolution controversy.

Creation / Evolution Jeff Bush, 2014 - . see to it that no one takes you captive through hollow and deceptive philosophy,

Evolution Science or Faith? - . genesis 1…to the evolutionist. this all took billions of years…. evolution?. change;

Modern Warfare: The Creation vs. Evolution Conflict - . a call to defend the foundation of our faith. vision. vision

Digital Revolution.. or Evolution - . - everyone wants universities to change , but exactly how is not so clear -the

Revolution or evolution? - . considering the impact of 'emerging church' conversations on the mission and ecclesiology of