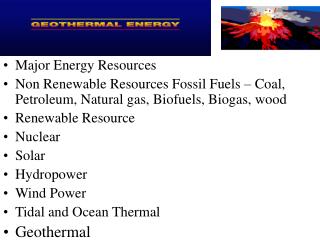 FUELS AND LUBRICANTS - . each substance which gives energy after burning is called fuel. fuels are classification by

The Economic Approach to Environmental and Natural Resources, 3e - . by james r. kahn. © 2005 south-western, part of

17- 1 - . upon successfully completing this chapter, you will be able to. discuss the reasons for seeking alternatives to

Objectives - Conventional energy resources. objectives. recognize the sun as the ultimate source of most energy on earth.

ENERGY RESOURCES - . notes and video clips for- energy: powering our nation. most of the earth's energy comes from the

Non-renewable Energy Resources - . chapter 16. essential question #1. what types of energy resources exist, and to what