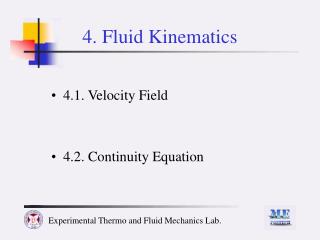 Kinematics of Fluid Flow - . lecture -5. introduction. up till now we have studied the effect of force on the liquid at

Chapter 4 – Kinematics (cont.) - . recap:. dropping a package. a) quickly lag behind the plane while falling b) remain

Ch. 4: Velocity Kinematics - . velocity kinematics. we want to relate end-effector linear and angular velocities with the

Ch. 4: Velocity Kinematics - . updates. lab will start next week, the prelab instructions are distributed today this will