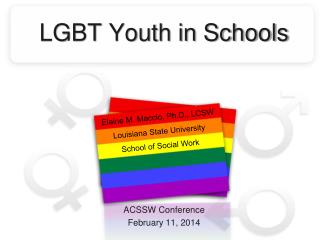 LGBT Youth in Schools. Elaine M. Maccio, Ph.D., LCSW Louisiana State University School of Social Work. ACSSW Conference February 11, 2014. Content. What does LGBT mean? Why is this important ? Who are LGBT youth in schools? What are some common problems among LGBT youth? Rosenwald Schools - . the advancement of black schools in the south (1917 – 1932). background information. in the

RUNAWAY TEENS &amp; “Street Youth” - . lgbtq youth in trouble! what can we do to help?. answering needs. opening

Strategies for Using Data to Address the Needs of LGBTQ Youth in Schools - . webinar presented by society of state

LGBT Refugees and Asylees: Responding to the Needs of a Hidden Population - . heartland alliance for human needs

Meeting the Educational Needs of Children and Youth Who Are Homeless or in Foster Care - . who are the children and youth