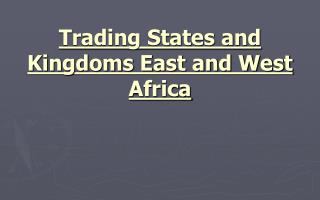 Trading States and Kingdoms East and West Africa. How will trade influence the history and culture of the African continent?. Commodity: a product that is exchanged in commerce What commodities do we get from other nations that we cannot live without?. Trade in the Sahara During period of small kingdoms, Arab Muslim traders arrived in India for first time - The arrival of islam. muslim

Vocabulary for Unit 1 and 2 - . transatlantic triangular trade. trading goods and products across the atlantic between