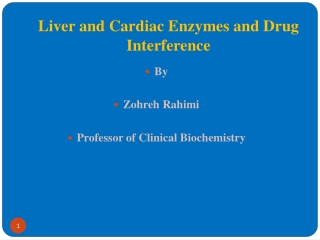 CARDIAC DRUG REVIEW - . what do you “see” when you stimulate beta. vasodilate bronchodilate +chronotrope +inotrope.

Abnormal Liver enzymes and/or LFTs: work-up and diagnosis - . what you need to know. differential diagnosis. population

Drug adjustment in ALL and liver failure - . by dr malek. the

Diffraction and Interference - . chapter 31. huygen’s principle. light waves spreading from a point source can be

Interference and Diffraction - . http://en.wikipedia.org/wiki/diffraction. huygens-fresnel principle. what if we block

Diffraction and Interference - . physics remember: light is both a particle…and a wave. light waves through an opening.

Interference and Diffraction - . two pulses. what happens when two pulses of equal magnitude move towards each other on a