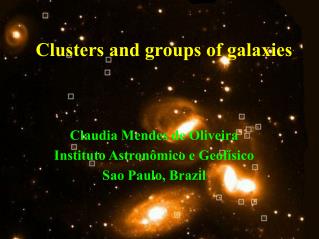 Clusters and groups of galaxies Clusters and groups of galaxies

STARS &amp; GALAXIES - . the view from earth. apparent motion. because of rotation of earth on axis, stars seem to

PHY 102 – Atoms to Galaxies - . phy 102 – atoms to galaxies. our early human ancestors most certainly looked at the

Chapter 27: STARS AND GALAXIES - . chapter 27: stars and galaxies. this lecture will help you understand:. observing the

Active Galaxies and Quasars - . many galaxies have powerful energy sources in their nuclei that, in some cases, produce

Star Clusters and the Center of the Galaxy - . shapley finally plotted the direction and distance to the globular

SPEAKING IN SMALL GROUPS - . speaking in small groups. small groups: have a limited number of members 3 to 12 have a