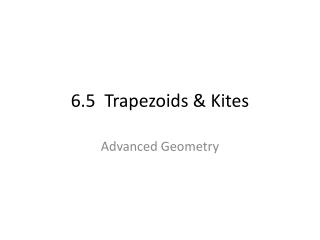 GEOMETRY: Chapter 6 - . 6.5: use properties of trapezoids and kites. a trapezoid is a quadrilateral with exactly one pair

Geometry B Bellwork - . 1) state whether the quadrilateral is a parallelogram. explain your reasoning. 6.5 trapezoids and

Kites - . regular man compared to the size of this dragon kite!. by annie miller.

Section 6.1 The Polygon Angle-Sum Theorem - . students will be able to: find the sum of the measures of the interior

Trapezoids and Kites - . chapter 6, section 5. essential questions. how do i use properties of trapezoids? how do i use

Kites, kites and more kites! - . where did the kite come

KITES - . by:ke’nnan o’garra. my presentation . i’m done with my kite power point and now we are about to fly our

Area of trapezoids - . http://www.backpack.tv/video/geometry/davitily/ly-nguyen/how-find-area-trapezoid. when are there

6-6 Kites and Trapezoids - . properties and conditions. kites. a kite is a quadrilateral with exactly two pairs of

5.3 Kites and Trapezoids - . kite investigation. recall the shape of a toy kite. what definition would you write to

6.4 6.5 6.6: Quadrilaterals and Their Properties - . objectives: be able to use properties of sides and angles of

8.5 Trapezoids - . vocabulary. trapezoids. what you'll learn. you will learn to identify and use the properties of