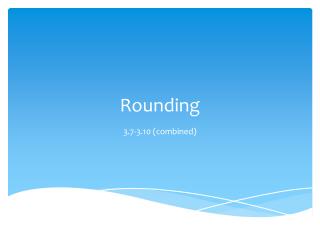 Rounding. 3.7-3.10 (combined). Today I can answer: How we round numbers to any place. How rounding is used in everyday life. Questions to ponder today: What is rounding? Why do we need to know how to round? When will we use rounding in real life?. Think about it…. Rounding - . by mr. walker. using the cinderella story. locate cinderella. 1,365,429. in any given number, cinderella is

Rounding - . decimal places and significant figures. remember:. although the following are discrete questions taken from

Rounding - . we need to round numbers because a calculator often gives an answer with more digits than are justified by

Rounding - . approximately about estimate. when to use rounding?. students should use rounding when they are asked to

Rounding - . locate the number that is in the column to be rounded. underline it. draw an arrow to the neighbor to the

Rounding - . if the number to the right of the number you are rounding to is 5 or more, you round up, otherwise you do

Beginners Rounding - . a poem to help you remember how to round…. find your place number. look right next door. 4 or