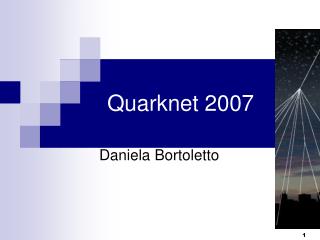 QuarkNet - . a national program that partners high school teachers with particle physicists working at the energy

Relativity: QuarkNet Lecture - Relativity: quarknet lecture. what we know circa 1900: light travels at a finite

Quarknet Symposium May 2003 - . neutrinos, dark matter and the cosmological constant the dark side of the universe