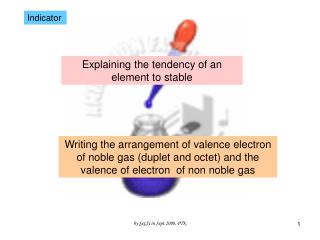 Indicator. Explaining the tendency of an element to stable. Writing the arrangement of valence electron of noble gas (duplet and octet) and the valence of electron of non noble gas. INDICATOR - 1.3.9. stirred chamber &amp; fi titrations. when the volume of a well-mixed chamber (v m ) is much larger

Indicator Matrix - . a tool to monitor local level spf sig activities . history of the indicator matrix. developed by the

Indicator 5.01 - . understand the use of an advertisement’s components to communicate with targeted audiences.

Indicator 5.04 - . understand the use of trade shows/expositions to communicate with targeted audiences. discuss types of

Indicator 3.09 - . understand the nature of customer relationship management to show its contributions to a company.