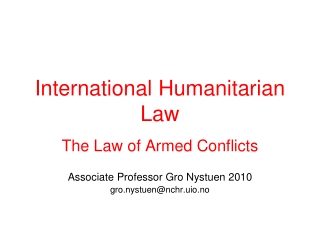 SESSION 5: INTERNATIONAL HUMANITARIAN LAW - . at the end of session 5, you will be able to:. state the purpose of

Survey on International Humanitarian Law QUESTIONNAIRE - . there is a body of law about how wars should be conducted,