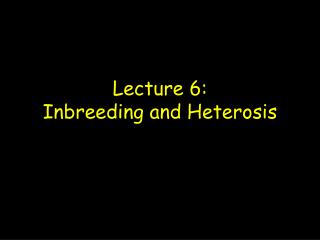 Lecture 6: Inbreeding and Heterosis. Inbreeding. Inbreeding = mating of related individuals Often results in a change in the mean of a trait Inbreeding is intentionally practiced to: create genetic uniformity of laboratory stocks produce stocks for crossing (animal and plant breeding) Lecture 6 - . placement of stress within the word. 1. what is word

Lecture 6 - . character tables. group theory makes use of the properties of matrices idea: when an operation, o , (proper

Heterosis - 1. heterosis. 2. heterosis. “ in my opinion, hybrid corn is the most far reaching development in applied

Inbreeding and Outbreeding - . inbreeding. occurs when close relations bred together. used by breeder to reinforce

Lecture 6 - . mobile ip. what is mobile ip?. the internet protocol as it exists does not support mobility mobile ip tries

Lecture 6 - . vii. real and published examples. borrelia valaisiana. b. garinii. b. afzelii. b. burgdorferi. b.