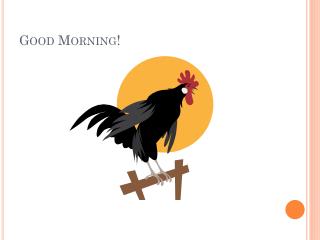 Latest Good Morning SMS - Began your day with beautiful, inspirational and motivational messages and quotes. along with

Good Morning Class - . the cat needs some water. the dog wants a bone. that bird lives in a birdhouse where she feels

Good Morning - . please find your new tables. send a representative up to get your books and journal papers. . “the

Good Morning - . welcome back. we hope you had a “ souper weekend”. on a post it, write what made your weekend “

Good Morning - . ap human geography. 5 themes of geography. what is geography?. the study of spatial variation how and

GOOD MORNING - . mrs. schroeder. i am a teacher candidate from the university of manitoba i am in my final year to become