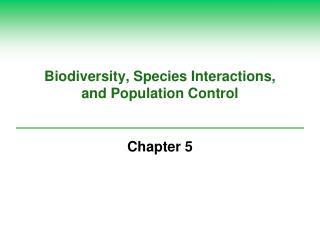 Biodiversity, Species Interactions, and Population Control. Chapter 5. 5-1 How Do Species Interact?. Concept 5-1 Five types of species interactions—competition, predation, parasitism, mutualism, and commensalism—affect the resource use and population sizes of the species in an ecosystem. .

Population Ecology - . study of the factors that affect the population dynamics of any species! current population clock.

Conservation of BIODIVERSITY - . biodiversity can be assessed and conserved at several levels: molecular/genetic (rare

Biology 30 - . population studies. introduction of some terms. a population consists of all the members of a species that